I'm sure I'm not the only one who's just a bit glad that April's over. For many it has been a very busy month, what with the A-Z Challenge. And for those that didn't participate, such as myself, it was because we were too busy with other things. So, in a way, I'm thinking I'm going to relax in May. But first, I have to wrap up April. 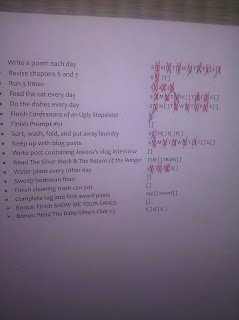 I tried my weekly goal list idea. While it definitely helped me keep up with my chores, I'm not so sure how it contributed to my writing. I immensely enjoyed checking off the little boxes (as you can see), but household things could be accomplished more quickly, leading me to focus all attention on them in order to get that small satisfaction. In a way it was almost anti-productive.

I am trying this again. However, because I've not been feeling well, this week has gotten off to a rough start. I feel unmotivated and the list does not infuse me with the get-up-and-go I need. Keeping this going is not looking likely at the moment.

This month, I completed one of my goals. What goals have you accomplished lately?

P.S. Here's the 32nd poem. I think it's sort of motivational.

Today-
today
is but
yesterday’s tomorrow
yet hold on tight
with both hands
because it is also
tomorrow’s yesterday
Posted by Brooke R. Busse at 9:00 PM
Labels: goals, my writing, myself/my life, NaPoWriMo, OBJECTION, planning, reading, revising, samples, THINK OF ME