Sorry. I had to get the excitement out of my system.

Because you see... I made All Region! And I wrote every day the past week! And I'm almost done updating Goodreads! And all the things!

-takes a deep breath- Now. Now it's all out of my system.

Over seven days, I wrote 469 words. Though that doesn't even equal two pages, it makes me happy. Those are words that I normally would not have written during a week like last week. Every day needed more hours in which to get everything done. Yet, if only for a minute or two, I found time to tap out a few words. That's a special accomplishment to me.

Since All Region is over, I hope to get more words written in the upcoming days. However, I have heard that All State (which I now get to go to :D) is in October. If I really want to make it, I need to practice a lot more. I'll have to figure out a way to adequately adapt my schedule.

Also, once I finish catching up on my social networking, I'll have buckets more time to write. I just need to add these last twenty books to my Goodreads and update my NaNoWriMo profile, which won't take too long. Then it's off to Tumblr and Youtube. At the same time, I'll continue reading my backlog of blog posts. Soon everything will be back to normal.

To part with, because I promised Laura I would be posting my writing, here are the 469 words. Please keep in mind that they are rough.

...I start to read the words with a voice in mind. I can’t get it perfect. I can’t match it up.

With the prompt, our minds automatically turn to Armie, because that’s all we’ve been able to think about for days, and from Armie it turns to our meeting in the bar.

“We had lunch with a friend,” we say.

The computer takes a second to reply. We wonder what tests it has to run before it can give us what it considers to be the best response.

Tell me about your friend.

We cock our head to the side, wondering what we should reveal and what’s important to keep hidden, because somehow we feel there is something we shouldn’t share.

We’re taking too long. The computer nudges us. What is their name?

Again, we take a moment to contemplate. Do we want Armie connected to this? What if they decide to bring her in too for more experiments? What if her name pops up some weird flag and gets her caught as a revolutionist?

A small puff of breath escapes our mouth as we part our lips with no words behind them.

Where did you eat? The computer nudges us again.

We smile. “It seemed appropriate.”

The computer takes longer than usual to respond. We wonder if we should nudge it. Our lip twitches.

Have you gone there before?

That’s the hammer that strikes the nail on the head.

And for Eme the answer is a million times.

Loneliness and the slumped shoulders of exclusion well up in my mind’s eye and the cavity where my heart usually sits. Backs come up from memories. Backs that are shaking with laughter, having already forgotten me, having no need for me.

Eme is trying to intrude, trying to comfort. But the hurt is a thick wall especially made to keep her out.

All of this rips through me in a second. Just a quick flash. The littlest pinch. Yet it leaves me shaking as the two of us stare at the computer screen in a silence with too many words in it.

“It depends on who you ask,” we finally say after what feels like a millennium or two.

There is a pause. Which one of you I ask? The computer asks, requiring more information. 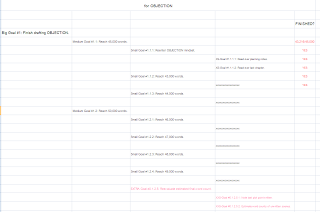 What do you think of my new goal plan? What about freedom with direction?
Posted by Brooke R. Busse at 5:00 AM 1 comment:
Labels: drafting, goals, my writing, OBJECTION, revising, THINK OF ME

I have reached a decision. I will complete the first draft of OBJECTION by NaNoWriMo.

Starting today. Every day this week I'm going to write. It doesn't matter how much, just that I do. I could write two hundred words or I could write three chapters. For this week, they hold the same level of achievement.

This method will work partly because I need to get used to writing on a regular basis again. Also, my All Region audition is on Saturday. One of my friends suggested I listen to my music while writing. That will help me better memorize the notes, which is great, but I can't type, look at my music (which requires turning pages), sing, and listen all at the same time.

I have yet to write today, but I plan to as soon as I sing all four songs at least once. It's already late, so I probably won't add a lot, but it will be something!

In other news, I'm already completely caught up on a third of my blogs. Now I'm working on my Goodreads as well, which requires going through all my shelved books and adding all my owned books.

I also finally finished my goal plan post. Come by Wednesday to see it.