The grand adventure of April is over. And we have some things to catch up on.

Let's be rebels and start with the good news. :P I won NaPoWriMo! Choir trips and the like kept me from posting some of my poems on time, but I did manage to write one every, single day. With as often as I've fallen short on my writing goals lately, this makes me really happy.

This NaPoWriMo differed from previous years'. Ideas were hard to come by and, for about the first week, so were the words. The latter became less of a problem when I abandoned the bitty notebook I employed last year in favor of the computer. I'm a mood writer when it comes to the utensils I use and I was not feeling pencil and paper.

On top of that, most of my poems were written at night when I just wanted to crawl into bed. Therefore, some of my ideas weren't as expanded or explored as they should have been. However, I like what I did write. Plus, I can always rewrite those poems later.

Camp NaNoWriMo wasn't quite as much of a success. I wrote 6,807 words toward my goal of 18,000, meaning I didn't finish the draft like I wanted. :/ However, I did pass 50k on OBJECTION! I feel like that's an achievement all in itself. I've finally reached OBJECTION's first Camp NaNoWriMo goal. It took me almost two years, but I did it. And that's something.

Of course, this sort of puts a kink in my plans and I'm going to have to rethink some things. The next Camp NaNoWriMo session is in July and I originally intended to finish last November's NaNoWriMo project during that time. Now, I might aim to finish OBJECTION instead and work something else out for my untitled lucky genes story. I'll let you know as soon as I've decided.

I also heard back from the Oklahoma Summer Arts Institute last month. It wasn't entirely bad news. I'm an alternate. This means I only get to go if someone else can't or doesn't want to. They can contact me up to June 13th. My hopes aren't high, but at least I didn't completely fail. My writing was good. There were just a few too many people whose was better.

Aaaand, to end on a positive note, I am caught up on reading blog posts! I've been behind for so long, it feels incredible to have that weight lifted off my shoulders. This means I can follow new blogs again and start looking for other writer bloggers close to my age.

Overall, April turned out good. I hope you enjoyed my poems along with my general-writing-related posts. (I'll be posting more of the latter soon. See sidebar for details.)

One of my favorite indie authors is Miss Rachel Morgan. Recently, she announced the upcoming publication of her new series and I'm super excited. While the books are not yet available, today I have the privilege of showing off their covers. (I'm sorry for posting late, Rachel!)

Are you ready? Here they are! 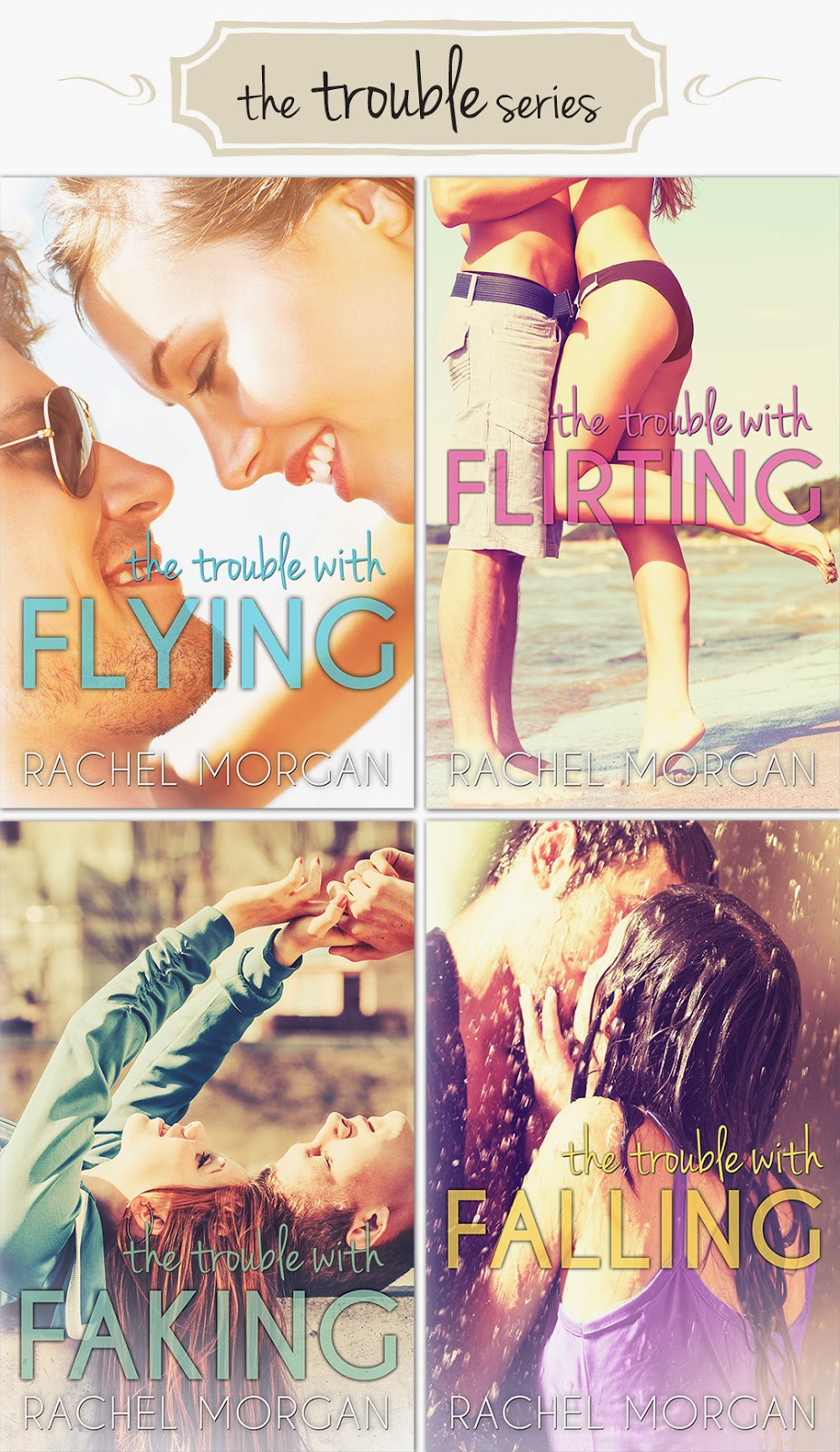 Four new heroines are about to enter the book world in this romance series full of swoon-worthy guys, comical moments, witty dialogue, and hot kisses…

Sarah doesn’t talk to strangers, but the cute guy sitting next to her on the plane might have to be the exception. Hours of random conversation later, Sarah thinks Aiden could be her happily ever after. The trouble is, he’s gone now—and she has no idea how to find him. ~ THE TROUBLE WITH FLYING

Livi sees her first year of university as a chance to redefine herself and finally fit into the popular crowd. But how far will she go before realizing that what she really wants has always been right in front of her? ~ THE TROUBLE WITH FLIRTING

After a stupid miscommunication, everyone in Andi’s new res thinks she’s secretly dating Damien, boyfriend of resident queen bee Charlotte. Since the rumor’s already out there and refuses to be squashed, Andi and Damian decide to keep up the facade in the hopes of snagging the attention of the people they really want to be with. ~ THE TROUBLE WITH FAKING

With exam stress, family wedding craziness, and a spiraling relationship with her boyfriend, Sophie finds herself sucked further and further into the darkness of depression. The only thing making her remotely happy these days is her art—and the guy on the other side of the internet who seems to really get her. But is that enough to keep her from falling off the edge entirely? ~ THE TROUBLE WITH FALLING

I always love Rachel's covers. She does such a great job designing them. And her writing's phenomenal, too! Want a preview? Check out The Trouble Series novella, FORGIVEN, for free.

Rachel Morgan was born in South Africa and spent a large portion of her childhood living in a fantasy land of her own making. After completing a degree in genetics, she decided science wasn't for her—after all, they didn't approve of made-up facts. These days she spends much of her time immersed in fantasy land once more, writing fiction for young adults and those still young at heart.