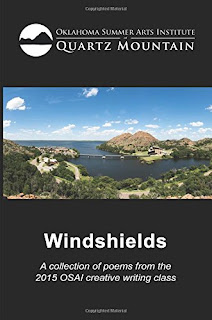 In this final post of the year, I have some news to share. I mentioned about two months ago that I had an announcement to make regarding OSAI. Here it is:

The anthology for the 2015 creative writing class (which includes me) has been released.

Once more, there is a picture of each contributor and three pages worth of work from them. I have one flash fiction piece and two poems included. I'm quite proud of them.

If you would like more information about the anthology or if you perhaps want your own copy, links are on my Publications page.

Hopefully, I'll have news of more publications soon. I submitted three poems to two literary magazines on my campus and am currently waiting to hear back. I submitted a short story to a contest being judged by Ellen Hopkins as well. I don't really expect to win, but I couldn't pass up the opportunity to have my work read by one of my favorite authors.

I would also like to tell y'all how my NaNoWriMo went, now that it's nearly the end of December. I finished with a word count of 17,718. Of course, that's no where near goal. However, I am not disappointed. This is kind of what I expected. And 17k is nothing to scoff at. It's a big chunk of a novel, a whole beginning. Something I wouldn't have if I hadn't tried NaNoWriMo this year.

As I said, this will be my last post of 2015, but I think I'll be posting again soon. I'm currently working on my goals for the upcoming year, which involves some serious thinking about priorities and what I want. I may have some decisions to share.
Posted by Brooke R. Busse at 3:02 AM 15 comments:
Labels: contests, drafting, my writing, NaNoWriMo, Oklahoma Summer Arts Institute, publishing, SPARK WITHIN ME, submitting, Windshields