End of the First Month - Goals and System Evaluation

Tomorrow is the first day of February. I have quite a few exciting things going on during the month. There's my Winter Formal, my sixteenth birthday, my mother's birthday, pre-enrollment for eleventh grade, my Oklahoma Summer Arts Institute audition (as well as Lizzie's and Ben's) where I'll also get to see some of my writer friends for the first time since this summer, and one of my other good friends has her sixteenth birthday too. I'm going to be very busy.

Today, however, it's still January, and I would like to give you an update on my goal progress as well as analyze and evaluate my goal system.

I had five Month Goals I wanted to complete in January. I completed one. And I am ecstatic!

My storyboard is finished, you guys! I feel like my story has finally settled into place. For two years it's been twisting and flipping around in my brain. Now, I have an outline I'm happy with set out in a way that makes it obvious what I have to do to make the writing reflect it. I can't wait to start work on the actual prose in March.

And while I didn't complete my other goals, they initiated progress. I added about 10k to OBJECTION and am focusing on finishing that draft in February. I finished SHOW ME YOUR FANGS and even though I didn't do anything with THE SMILE FIXER, I still completed two short works with the addition of HEARTH AND HOME. I haven't been feeling the reading, but I've squeezed some in.

This system is working great for me. It's helping me to be both productive and organized. It keeps me from feeling bad when I don't accomplish something in a certain amount of time by showing me all the things I have accomplished. It makes me feel good about what I'm doing and motivated to keep doing it.

I've already decided on and inserted February's goals into my spreadsheet and I can not wait to get started!
Posted by Brooke R. Busse at 11:23 PM 9 comments:
Labels: drafting, goals, my writing, myself/my life, OBJECTION, Oklahoma Summer Arts Institute, reading, revising, THINK OF ME

Trying Not To Be a Hypocrite

Every person is the star of their own play, but sometimes it's hard to see past the stage lights. Hard to see the faces of the other actors. The faces of the audience. To remember they're there, they're real, and they have feelings.

Yet, if someone at school asks me to read something they've written, I have to keep myself from groaning.

Partially this is because that stereotype I'm so afraid of stems from truth. The things my peers write usually aren't so great. And then what do I tell them? I won't say it's brilliant or that I liked it. I won't lie to make them feel better. But why should I make them feel bad when their pursuit of writing usually doesn't last longer than two weeks?

Still, I squint through those stage lights and see the faces of the audience and remember. I read the things they give me and try to keep an open mind. Sometimes I'm surprised.

But people my own age are not the only people I judge like this.

Occasionally, when I'm reading a new blog, I'll get a rather mean thought. I have to catch myself and tell myself that everyone has to start somewhere. The greats were not always so. I have to remind myself that I'm not so far along this journey myself.

Perhaps it is a human thing to do, to make snapshot judgements about someone that you would not want made about yourself. But that does not make it right. I try hard not to be a hypocrite, but sometimes it takes a little more effort than others. Perhaps sometimes I don't always succeed. Feel free to point it out to me if you ever catch me failing.

And remember, those stage lights that don't allow you to see everyone else, make it easier for everyone else to see you.

How do you do on stage?
Posted by Brooke R. Busse at 11:31 PM 10 comments:
Labels: myself/my life, others writing, thoughts

Time's Up - The First Set of Half-Month and Mini-Goals

Yesterday was the last day to complete my first set of Half-Month and Mini-Goals. Since I've never tried this goal system before, I thought I might share my experiences and progress. It could help you decide if this is something you might like to try in the future and it will assist me in getting my thoughts/plans for the second-half of January organized.

Before we dive into feelings and thoughts and all that mumbo jumbo, let's start with some stats.

The four Half-Month Goals were broken down into fourteen Mini-Goals. I finished five of them.

Looking at those numbers, it does not seem as if I had a productive fifteen days, but let me put it into perspective for you.

The four Half-Month Goals were:

I finished reading/making index cards for THINKING OF YOU up through chapter ten, putting that Half-Month Goal at one-third complete. That's serious progress for me. I've started working through my scenes, deciding what has to be moved or merged. I've started considering where new scenes need to be added, which is important since deciding on and making index cards for those scenes is January's second Half-Month Goal. I'm not worried about finishing my storyboard by the end of the month. Next Monday there's no school and I'm setting aside that day to do the last twenty chapters.

While I didn't reach 42,000 words on OBJECTION before my first deadline, I did get there today. The word count currently stands at 42,058. I plan to finish the draft by February 1. However, before I write another word, I intend to sit down and re-outline my ending. I've changed it quite a bit and I need to see how it's going to play out on paper. I'll probably do that tomorrow and then continue my steady progress to the end.

I now have a draft of SHOW ME YOUR FANGS, a story you may remember from early last year. I intend to edit it in the next couple of days and use it in my OSAI audition. I didn't even touch THE SMILE FIXER though, barely even thought about it. Perhaps this weekend in between laundry loads I can finish outlining and start drafting.

On each of the first three goals, substantial progress was made. This cannot be said for the reading goal. I read two out of those fifteen books. If I catch up in time, it will be a miracle. Right now I plan to focus on the sixteen books I planned on for my second January Half-Month Goal. If I have time after reading them, I will go back to the books for the first half of the month.

I have to say, even though I barely finished anything, I am not upset or disappointed in myself. In fact, I'm rather happy. This goal system is more a way to keep me moving forward with my writing than to make sure that I finish all of my minor goals. And it's doing its job splendidly in my opinion.

How did the beginning of January go for you? What do you think of my goal system?
Posted by Brooke R. Busse at 11:59 PM 16 comments:
Labels: drafting, goals, my writing, OBJECTION, Oklahoma Summer Arts Institute, planning, reading, revising, THINK OF ME

I'm going to brag, because sometimes it's good for you. And because this is the Internet so I can't see your disapproving faces while I do it. ;P

I completed five index cards for my THINKING OF YOU storyboard. Five. 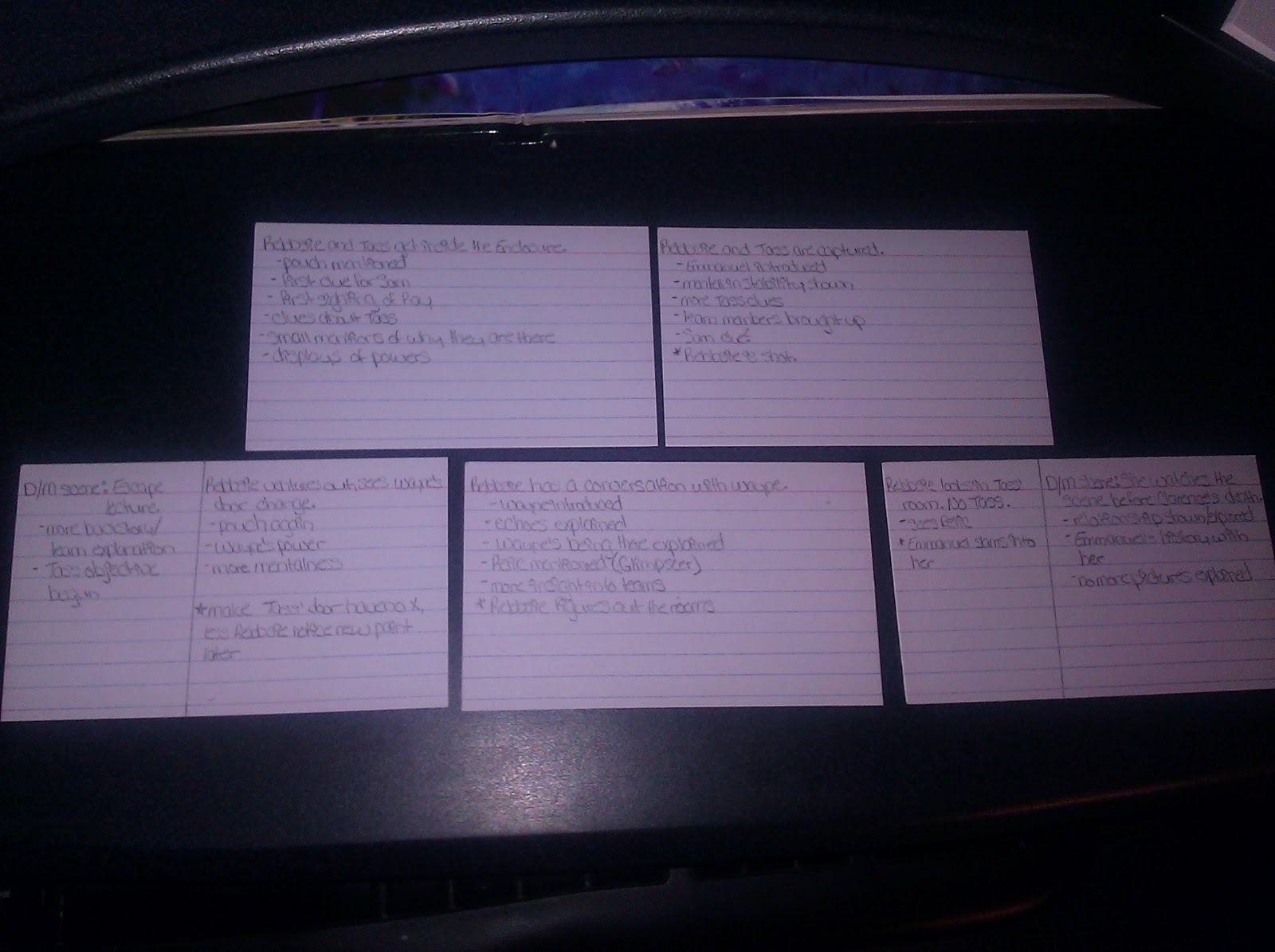 It doesn't matter that they were simply summarizing the chapters. That I didn't have to even think about whether the scenes should be majorly revised to fit my changing storyline. Nope. It only matters that I sat down and did it. (Plus, the way I look at it, it means I have a strong beginning.)

I have to do this for the next five days to complete my first Half-Month Goal for THINKING OF YOU on time. I can do it. I know I can. It won't be too hard because I've been thinking about how my scenes should change and be ordered for a while now. I just have to focus and take the time to actually PBICPIHAEOCS (Put butt in chair, pencil in hand, and eyes on computer screen).

Not only did I start my storyboard, I also reached the minimum word count for the day that I need to reach 42,000 words on OBJECTION, which is my Half-Month Goal for it, on time.

P.S. If you're interested, the first page of THINKING OF YOU is going to be critiqued on Unicorn Bell on Sunday. Stop by if you can and tell me what you think.
Posted by Brooke R. Busse at 11:57 PM 11 comments:
Labels: critiquing, my writing, revising, THINK OF ME