Who Says Dresses Have Nothing to do With Writing?

However, they also all have things in common.

They all cover the area from chest to at least a bit below the crotch (if they don't, it's not a dress). They all share that characteristic where they're, ah, open at the bottom. They're all considered clothing and are made from fabric.

They all have the same basic characteristics that make them dresses. 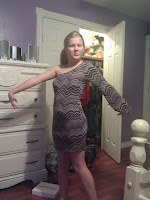 Stories, whether in book or script or poem or short form, are like this too. (Yes, this is another one of those posts where something is turned into an analogy for writing.)

For instance, if I asked you to describe that purple dress over there, what would you say? (This is the hint for you to leave it in the comments so we can compare.) Here's mine:

Shades of purple fall in ripples down the fabric, losing their way and missing one arm. 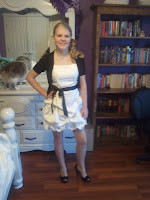 Yours is probably very different from mine, but that doesn't mean it's not good. Just as two dresses can look nothing alike and yet both be pretty, you can be a brilliant writer without writing like J.K. Rowling or John Green. A dress could have ruffles or it could have lace. Your book could be paranormal or contemporary. And it would be wonderful either way.

Celebrate differences because without them I wouldn't have all these pretty dresses and the world wouldn't have so many awesome books.

And I promise I'm not conceited. I just prefer to use pictures that are mine and not Google's.
Posted by Brooke R. Busse at 3:00 AM
Labels: myself/my life, thoughts, writing itself