Today I am showcasing one of two books that have just been released this month. They are very different, but they do have one thing in common. The Undead. -dun dun dun- 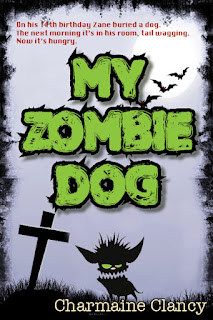 Zane had the worst birthday ever. He spent it arguing with his Mum and burying a dead dog. Things just get worse. The next day Zane wakes to find the dog in his room, covered in dirt and… wagging its tail.

This is not Zane’s idea of the perfect dog. It’s shaggy, smells undead and bites people. And why do its victims all turn sluggish and keep asking for brains?

Can Zane find the solution to save his neighbourhood from a zombie plague?


This is a cool zombie story for children and young teens. It's funny, a little creepy without ever getting too scary, and the tone is perfect for its target market. Zane is a likeable narrator, and poor little Fossil is endearing, even as she decomposes. Charmaine Clancy writes well and is definitely a natural born storyteller. (And how perfect is that cover?)

Charmaine is also hosting a majorly awesome, majorly generous giveaway of either a Kindle Fire (United States only) or a Kindle 3G. To enter you must a) buy a copy of My Zombie Dog for $2.99 or b) blog about My Zombie Dog (this includes reviews and interviews of Charmaine) or the giveaway. Bonus points are given for tweeting. Giveaway ends March 31st. Remember, you must fill out the entry form at the above link to be in the running.

Bonus Question: What inspired you to make your initial zombie an animal instead of a person?

Charmaine: The zombie creature in My Zombie Dog was inspired by... my zombie dog. No really. We had this little dog that would go totally whacko without warning and lunge and attack everything. This dog got into so many fights with much bigger dogs and during the attacks it would flop down and act dead. I thought it was many times. Then it would 'rise' again a few minutes later. This is the real 'Fossil,' who now lives with my mother where she is rewarded for keeping terrorists away from the front door. We still have our other two dogs, and they still suffer nightmares about the zombie dog. 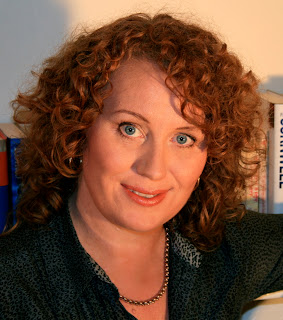 Find Charmaine At: Website | Blog | Facebook | Twitter | Google+
About Charmaine Clancy: Aussie writer Charmaine Clancy loves to create characters for mystery, fantasy and adventure. All her stories are fictional, except maybe MY ZOMBIE DOG (some say to this day you can hear her dog softly moan the plea 'braaaains').
Posted by Brooke R. Busse at 3:00 AM
Labels: giveaways, interviews, others writing