Continuing with my March theme, author Kaylie Austen is here to tell you about the two books she is releasing this year; one with World Castle Publishing and one with kNight Romance Publishing. Exact release dates are to be announced. 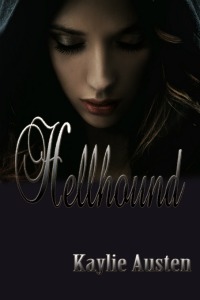 Selene is the Hellhound, a powerful and ruthless descendent of the Greek gods. She is bound by tradition and tied by bloodlines to lead her people against the mortals. Although she is arranged to marry Nathanial, she falls for Demetrius, the self-professed Black Angel, and things take a bitter twist. When she stumbles across the corpses of her father and Nathanial, all eyes move in on Demetrius. Selene must take the assignment to hunt down her accused lover. Facing the untrustworthy cerebral chamber, powerful shape-shifting sentinels, superhuman archers, and a deceitful Council, the Hellhound must work quickly to uncover the truth before she is forced to annihilate her lover.

Silver Waters (Book One) -- YA fantasy:

After centuries of human tolerance, mythical creatures band together to liberate themselves by destroying mankind with torrents, storms, and earthquakes. Loral is the last surviving human girl. When the king’s guards drag her into the water anomaly, she transforms into a mermaid, kept as the last surviving artifact from the lost world.

After treason occurs against her prince captor (Trent), Loral flees for her life only to stumble from one deadly situation into another. Mistaking her for being a part of the propaganda against humans, the rebel prince (Tripp) kidnaps her. When he realizes her innocence, his feelings for her change, and his love for her ignites an old rivalry against Trent.

Except, Trent isn’t the biggest obstacle underwater. An insidious council of sea elves, an army of water dragons, and an untamed species of sea serpents threaten the love between the last human female and her prince.

Brooke: You have another manuscript, RAVENS, that has also been picked up by kNight Romance Publishing. From your blog I have gathered that there have been some issues with getting it ready for publication. What is the current status for this novel?

Kaylie: RAVENS hit a few snags and required major revisions. I received a good word about RAVENS. It’s been “resurrected” and will hit editing this week. RAVENS is YA Urban Fantasy, inspired by the X-Men, and involves a romance with a bad boy, a girl transformed into a Raven and hunted by humans, and a reunion with a younger sister thought to have died 10 years ago. Ravens aren't as the world wants us to believe, sinister and without human

B: In this post, you mentioned that you recently wrote a novelette length contemporary romance. From what I can gather, this is very off from your normal genres. How did it feel to write something lighter?

K: This isn’t my usual cup of tea, but sprang from a dream. It’s weird to write contemporary. I’m always tempted to throw in something supernatural or sci-fi. This turned out to be a light comedy with some big, romantic sparks. It was fun, but I don’t foresee writing a novel from it, perhaps not even another contemporary short story.

B: From your blog and website I have gathered that you are not entirely unpublished. Give us a list of all your published works (shorts, novelettes, etc.) and where we can buy them.

K: I had a series of paranormal romance novellas appear in the Weres in the City digests from Midnight Showcase in 2010. This small publisher closed its doors, so the novellas are no longer available. However, since the rights reverted to me and I’ve made significant changes, the novellas turned into an accidental novel (if that’s possible). I didn’t intend on revisiting the stories, but they beckoned and turned into a full-length novel…which turned into a five book series (in my head at least). Perhaps readers will see this series in a couple of years.

I’ve been writing since the age of ten, and completed two novels before high school graduation. I love to learn, my life is rich with culture, and I’m an undercover nerd.

Kaylie will return on Friday with a guest post on writing in multiple genres. Be sure to come back by!
Posted by Brooke R. Busse at 3:00 AM
Labels: interviews, others writing