A Picture Painted These Words

As part of last year's New Year's Resolution to become better at critiquing, I joined Unicorn Bell. I am fairly active there, submitting and critiquing pieces. Now, I am participating in their first blogfest.

The idea is to use a picture for inspiration. Go here to see the ten possible choices. The one I chose is below with my story.


SHOW ME YOUR FANGS

Perhaps disobeying her mother was a mistake, but she never regretted it. Especially not this time.

Never go to the park.

She swayed lazily in the swing, her foot scraping the ground. The playground was deserted. Not unusual. Neither was the sound of rusty chains creaking, the wind fancied itself a child, but it caused her to glance at the swing beside her anyway. 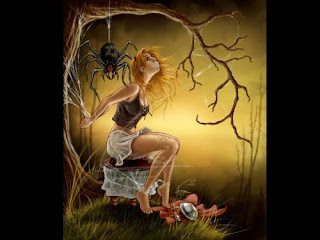 If you ever see him, run.

Resting in the arch of worn leather was a giant spider. Not the size-of-your-big-toe giant. Larger-than-your-head giant. Her foot came down flat, ceasing her endless motion. She blinked, slow, deliberate.

Spider coloring gone, he sat watching her. His black hair fell over a couple of his eight eyes, red ringing each pupil. He had an arm laced around the swing’s chain, eight fingers laced through it.

“Tell me, are your spidey senses tingling?” She started to swing again.

When he blinked, his eyelids moved in a wave of motion. “You aren’t frightened?”

“Well,” she leaned toward him, her swing bumping his, “show me your fangs.”

---to be continued
Posted by Brooke R. Busse at 10:16 PM
Labels: blogfests, critiquing, my writing, samples