Today I am very excited to be hosting Michael Offutt on his blog tour for his newest book, OCULUS. Michael has always been a wonderful supporter of mine and I am happy to return the favor. Make sure to read the whole post because at the end there is information concerning two OCULUS themed giveaways! 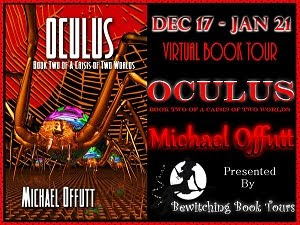 There are days when I doubt myself but not today.

There are days when I write a sentence, and I imagine that if Stephen King or Neil Gaiman wrote it, it would sound better. Take for example the sentence “I bought a car today.” King might say “I bought a hearse” whereas Gaiman might write, “Odin bought a Chevy from a used car salesman.” The whole “Odin” thing makes it different. God-like. But by name dropping Chevy it’s also instantly American. And maybe that’s all you need to write the great American novel. That and cheeseburgers. Americans love cheeseburgers.

I think OCULUS represents my best work. And by best, I mean that I’ve reached a point in my writing where I no longer thought it might sound better if written by someone else. I’m not sure why we even think those things. But I think all writers do. But if it were written by someone else, then it would be theirs and not yours. I think the one thing that many writers need to embrace is that no one can write what you know better than you. That’s just the way it is.

If you wanted to see how I write, I have a short story for you. It would take 15 minutes of your time to read. That’s it. Fifteen minutes. It’s called “The Insanity of Zero,” and it tells you all that you might need to know about my books SLIPSTREAM and OCULUS. There are days when I doubt myself. But it’s not this day. Today, I think I could win you over, if you gave me fifteen minutes. The choice is yours. :)

Go here for “The Insanity of Zero” if you dare. It’s completely free! 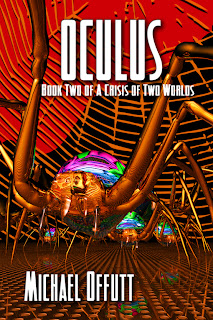 Autumn has arrived in New York, and Jordan Pendragon attends his first classes as a freshman at Cornell. Born with a brilliant mathematical mind, he balances life as a research assistant with that of a student athlete.

Michael Offutt writes speculative fiction books that have science fiction, LGBT, and paranormal elements. His first book, SLIPSTREAM, has received some critical acclaim and was published by Double Dragon in the spring. The sequel, OCULUS, came out in November 2012. He has one brother, no pets, and a few roots that keep his tree of life sufficiently watered. By day, he works for the State of Utah as a Technical Specialist. By night, he watches lots of t.v., writes, draws, and sometimes dreams of chocolate.

Michael Offutt graduated from the University of Idaho in 1994 with a Bachelor's degree in English.

He keeps a blog and would appreciate a visit or two even if all you want to do is say hi.


If you think Michael's book is something you would like to read, he's put up six signed print copies of OCULUS for an international giveaway.


Also, I have been given permission to giveaway one OCULUS bookmark. This is available internationally as well. Just leave a blog post comment telling me what you thought of Michael's first book, SLIPSTREAM, or why you think Michael's books sound interesting.

Thanks go to Roxanne Rhoads at Bewitching Book Tours for organizing this blog tour!

Posted by Brooke R. Busse at 12:00 AM
Labels: blog tours, giveaways, others writing