Can You Hear Me?

Testing. Testing. One, two, three. Does this thing still work? I hope so.

I know it's been over two months since I posted anything, but, to be honest, nothing much has happened. At least on the writing front. My life has still been hectic and time consuming, but I think it's settling down now. I may have to move soon (crossing my fingers for staying), but other than that, everything is steady and normal.

There are a couple of big things I should share with you. In April, I learned that I did not get accepted into the Oklahoma Summer Arts Institute for 2013. That was a heavy blow. Luckily, my friends were there to support me through the crying. However, even though I was rejected, I still stand by the pieces I submitted. And! One of my good friends did get accepted into their percussion program. He just got back and he had a great time. Hopefully, we can return together next year.

I'm also working on revamping my goal plan (again...). But I won't go into that now because I will be writing an entire post to explain why and how. I'm not sure when exactly because I don't currently have Internet on my personal computer which makes it a bit hard to provide visual aids. Plus, I have to finish the remodel before I can reveal it. Duh. :P

Now, this post doesn't mean I've come completely out of hiatus, but I am working on that. I've been gone a while now and there's so much to catch up on. I'm reimmersing myself slowly. Already I'm keeping up on my emails and have responded to everyone who commented on my Figment profile (though I still have some stories to finish reading and critiquing). And though I haven't been posting, I've made sure to keep up with all of your comments.

While I'm once more getting comfortable with the swing of things, I want to reconnect with my joy for blogging. To do this, I decided it would be best for me to write posts that don't require much thought for a while. By that, I mean more organic posts, more natural me posts. The kind of things I used to write about when I first began my blog. Things like the slightest progress on any given project or ideas I get during the day or new office supplies (I'm just itching for the back-to-school season at Wal-Mart). Simple little updates to get me back in the habit of writing regularly about my writing.

And I thought I'd start now with two small things to go with my two big things. :)

First, Figment is currently hosting the Ink Haiku Contest. The prompt is loneliness. I have until July 15th to come up with a good idea and submit my entry. When I do, I'll let you know and post a link (along with a plea to check it out maybe...). 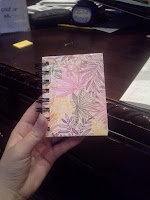 I'm using it to write down short story and poem ideas. Each new one gets its own page. I'm even including information about what inspired them. The notebook fits in my tiny teenage girl pockets (because apparently girls don't use their pockets) so it can go with me anywhere. And it's pretty. :D

And that's it (like I said, writing life pretty much non-existent). You'll be hearing from me soon. In the meantime, I'm off to read contest rules and watch videos on YouTube. Also, keep an eye out. I might be getting a new profile picture.

Have you posted anything recently that you think I should read right now? Leave a link in the comments and I'll stop by to check it out.
Posted by Brooke R. Busse at 2:50 AM
Labels: bloggy things, contests, critiquing, goals, my writing, myself/my life, Oklahoma Summer Arts Institute, rejections