YAK Fest - Part 1 [Getting To The Authors]

Over the past few months I have mentioned here or there in comments that I would be going to my first author signing soon. Ellen Hopkins would be coming within three hours of me. On Saturday, January 16th, I went to meet her at the Young Adult Keller (YAK) Book Festival.

On Friday, after going to Quizbowl practice, I went home, bringing two of my friends with me (hereafter referred to as Lizzie and Alisha). We proceeded to the grocery store for snacks and dinner ingredients and then home, upon which we munched on those snacks and made those ingredients into a dinner. A few hours later (at which time I was growing anxious because she was supposed to have been there soon after we got home), another of my friends (hereafter referred to as Jess) arrived.

The night was then spent on doing makeup and hair (or in my case, just hair), experimenting for the next day. Amidst all the laughing and girly chit-chat, we managed to drag out the pull-out bed and blankets and I got all nine of Ellen Hopkins' books into a backpack. We went to bed later than we should have seeing as we had to get up at seven.

In the morning we all stumbled out of bed, our eyelids drooping down past our chins, got dressed, and climbed into the car, books, snacks, and makeup box in tow. I started out in the middle bench seat, but got bumped to the front (my mother has to sit next to you when she's doing up your face) where I took a nice doze for about an hour. And, even after I got bumped back, I continued to do so on and off for the next two as well.

Upon reaching the high school where the event was being held, my father and sister headed inside in search of a restroom and us girls stayed in the car to finish up makeup (of which I gave in and took just a tad), joking about how big of a deal we were making this out to be and freaking when Jess set off the car alarm. We finally made it inside around eleven or so, registered, signed up for door prizes (except for my mother we discovered later), and picked up our programs. 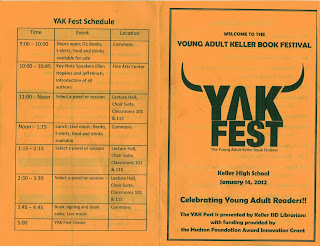 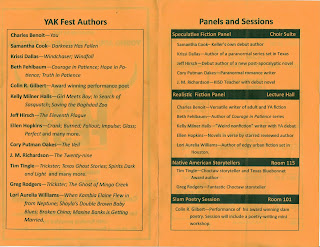 I was disappointed to see that we had both missed the Key Note and Ellen Hopkins as a speaker, but our pamphlets informed us that it was time to pick a session and she was listed under the Realistic Fiction panel...