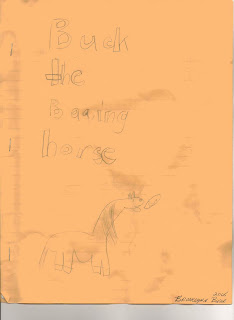 Recently, while at my great-grandmother's house, she showed me a picture book that I had written and illustrated at her house in 2005. I would have been about eight. In the timeline of my writing career, BUCK THE BAAING HORSE is displayed as the first story or 'book' I ever wrote.

Of course, it is deeply flawed. There is information given that isn't needed and information that is needed sometimes isn't thrown in until the last second. I gave my characters names but half the time still simply called them 'the frog' or 'the cat'. My tenses switched. The ending was a complete clique. (And from an illustrator's point of view, my drawings weren't very consistent.) But everyone has to start somewhere and the fact that I recognize all this now just shows how far I've come.

Why am I bringing all this up? Today is my blogiversary. Exactly a year ago today, I posted my first blog post entitled 'At the Bottom'. I discussed how writing and publishing takes time and my preparedness to work toward those goals. I talked about THE LULLABY rewrite and what my hopes for it were.

While I still may be working on that rewrite, I've come damn far in a year. I'm mere chapters away from being finished with the rewrite, I have a whole other manuscript, I've written a short story almost every week in 2011, I wrote a poem a day for a month, I've come up with plenty of new ideas, I've found critique partners, and I've gotten to almost 200 followers on this blog. Who knows where I'll be next September 18th?
Posted by Brooke R. Busse at 7:26 PM
Labels: bloggy things, critiquing, my writing, myself/my life, NaPoWriMo, rewriting, The Chrysalis Experiment, THE LULLABY, THINK OF ME